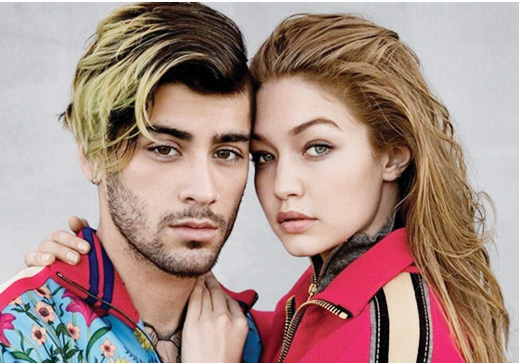 Gigi Hadid and Zayn Malik confirmed on social media that their romance is over. The 22-year-old model and 25-year-old musician each posted on Twitter about the end of their two-year relationship. Hadid wrote that she is “forever grateful for the love, time and life lessons” she and Malik shared, adding that “there is really no way to put into words what two people experience together over a few years.” “I want nothing but the best for him and will continue to support him as a friend that I have immense respect and love for. As for the future, whatever’s meant to be will always be,” she continued.

Malik said the two “had an incredibly meaningful, loving and fun relationship” and that he continues to respect and adore Hadid “as a woman and a friend.” The singer went on to thank his fans for respecting the difficult decision. He wrote, “I’m grateful to all of our fans for respecting this difficult decision and our privacy at this time, we wish this news could have come from us first.”

The reason behind the split is unclear. Hadid is a supermodel who has been featured by Versace, Fendi, Balmain and other high-end brands. Malik is a singer and former member of the band One Direction.

Earlier, the two celebrities battled rumours of their break-up in 2016 after eight-nine months of dating each other. The two first sparked romance rumors in November 2015 when they stepped out together at an American Music Awards after party. Soon, the two became the most sought-after couple of the industry.

KRISTEN STEWART TO PLAY JEAN SEBERG IN AGAINST ALL ENEMIES KRISTEN...

‘To All The Boys I’ve Loved Before’ star felt at home...